Walmington on Bromley End, Bloodford - Homes for the Home Guard

As I slowly move through my lead pile of things Home Guard related, the realization set in that I would need terrain and a fair bit of it if I wanted to replicate Dad's Army, Went the Day Well or The Eagle Has Landed. I toyed with making up buildings out of foam core and other materials but practically, that wasn't a realistic option. With some Christmas money in hand, I went shopping. There are many good manufacturers out there with some very nice products in 28mm / 1/56. Some of the resin offerings were beautiful but expensive, and for many companies, their UK styled offerings were focused on terraced housing.

I decided to go with Sarissa primarily because of their very generous shipping terms and because they ship Royal Mail. (As mentioned in a previous post, courier companies like to gouge Canadians for customs fees). The order was placed and a few weeks later, my order arrived in my mailbox. It came in two separate packages, both properly marked as to contents and value and with no import fees payable - a double bonus.

First up is the L016 Stone Cottage.  This is  a pretty little kit with double walls allowing for the outer wall to lean in - see below and for prototypically thick windows and doors. The interior fireplace and flagged floor was an unexpected add on. A reasonable amount of stone detail is laser etched into the MDF but the effect was still too flat for my liking. At various points in the assembly, I used my Dremel tool to deepen the lines and add more texture. The material used by Sarissa is thick enough and robust enough that I was able to significantly improve the appearance especially around the chimney. I used a very small ball cutter to deepen the lines, followed by a grinding point to round the edges and a wire wheel to soften the effect over all. As always when working on MDF, proper breathing  protection against the dust is a must.

Next is the N005 Small Shop. A basic two level building with removable roof and first floor, it is a great addition to the high street.
The astute among you will notice that the front door and and window are reversed compared to the official version shown in the link above. This was intentional. Sarissa uses several standard sized components across different models in their ranges. On opening the shop flat pack, I was delighted to see that it included a wall section with a rather pretty arched door and window. Rather than use this at the back of the shop, I swapped it out with a standard wall and window section from the one of  the single story houses below. To keep the front and back doors in opposing corners, I reversed the shop window and put the door on the left. I like that the  replacement wall gives a barred window effect for what would be the shop stock room.


Which brings us to a pair of  N021 Single Story Houses. First is the stock version:

A simple little building that will make a good hiding place for a Vickers or an angry housewife with a brace of Molotovs. And the modified version:

Swapping the walls gives me two versions of the same building while breaking up some of the same-iness common to MDF structures.


Last of the buildings is the N009 Small House. Another functional building that will blend in on the high street or act alone as a larger farmhouse.


The last piece from Sarissa is the N048 Stone Bridge - Double Arch shown here with a Die Waffenkammer Neubaufahrzeug on its way to put the jackboot to an unsuspecting bucolic English village.


It comes in several versions with up to three arches. I went with the double arch version for maximum flexibility. The ends and middle seem to be very stable as is, but I may add rare earth magnets to lock them together if required.  Size wise it is probably a little over scale width, but that is a positive for us wargamers.


The Sarissa products are quite a bit smaller than my Charlie Foxtrot pub but I don't think that will be a problem. The pub is a large piece for any table.

Laid out, I think I now have enough buildings for a rather exciting urban fight.

Overall, I am happy with the results. The price was good and I was able to get some extra variety out of my purchase. There is a lot more work to do on painting, finishing and the roofs, but they're fine for play testing scenarios as is.
Posted by PatG at 6:43 PM 5 comments:

I was looking into buying a Taig lathe  to do some hobby related machining but by the time I priced out all  the bits needed to actually do anything, it cost significantly more than what I had in my budget - at least for now.

Instead, I wound up buying a Dremel tool, which I have been wanting for awhile, and an assortment of wood steel and brass bits to build one of these: Fonly Lathe

Loosely based off a watchmaker's lathe, the design has been successfully used for making 2mm/foot scale model railroad parts. I made a whole series of beginner errors starting with buying a stainless steel bed plate thinking it would be easy to drill (Hahahahaha......). That was followed by some fun drilling holes in the brass block for the tool holder. I'd always used a pin vise on relatively thin stock with no real problems so I wasn't expecting the bigger drill bit to  grab the brass as badly as it did. If I had a drill press, it would have gone much quicker and straighter. In then end I wound up with this: 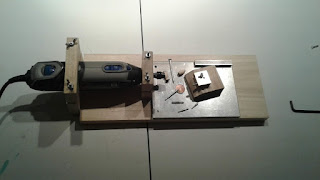 It looks pretty crude but everything is solid. The block on the right is the tool holder.  I got this far then ran into a period of frustration because I couldn't get the damn thing to cut. I was able to do a little shaping of brass and wood with hand held files but I couldn't get the hang of making and setting up the cutting tools.

Much research and Youtubing followed and finally I made a leap in progress. 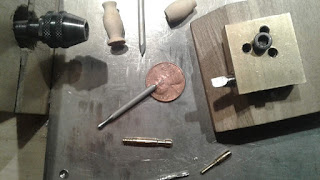 The wood jars and most of the brass were shaped with files. The aluminium stock is a 1/8" dia roofing nail and the pin on the end was turned down by hand using my new tool. I haven't measured it but the penny should give you an idea of how small it is (I got the calipers out this morning - it's 0.3mm - not bad for free hand).

Having made it this far, I have a few lathe bits to make over and I want to make a taper slide for turning gun barrels.
Posted by PatG at 8:56 PM 1 comment: